There is a lot of hype about Puglia, or Apulia, as it is officially known in Italy. It is certainly having ‘a moment’ – purported to be the ‘new’ Amalfi Coast or Cinque Terre – without the crowds.

It’s become so ‘on trend’ that even Australian fashion designer-turned-property-developer Collette Dinnigan, and others like her, are creating their own ‘la dolce vita’ in the heel of Italy’s boot.

I was dubious. Would it really live up to its fame? Being a self-avowed Italophile, my expectations were high.

Despite its relatively small size, Italy is a land of contrasts. The wealth and sophistication of Tuscany is a world apart from the rustic simplicity of Sicily. Puglia is in the deep south – a lifetime away from the designer arcades of Milan or refined streets of Florence. But if it’s authenticity you seek, then it has it in spades.

Stay in a trullo for an authentic experience

It’s not all about the trulli, but they certainly make their presence felt! Those mysterious lime-washed, dry-stone farm buildings with cone-shaped roofs, dating back to the 14th century, dot the countryside in various stages of repair. I was determined to stay in a trullo if I was going to Puglia and found the Masseria San Franceso, a former monastery and farm now transformed by a wealthy family from Bari into Nina Trulli. Centrally located in the Valle D’Itria, near the coastal town of Monopoli, it perfectly housed our group of six. 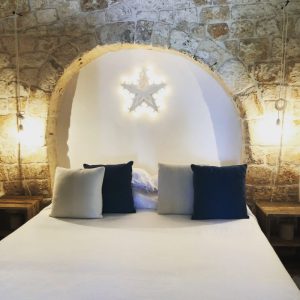 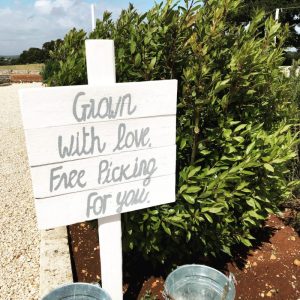 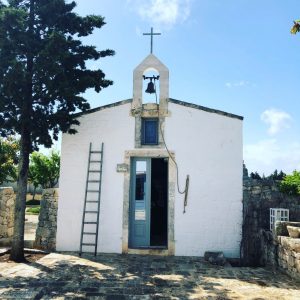 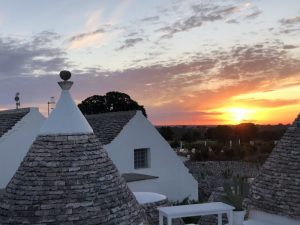 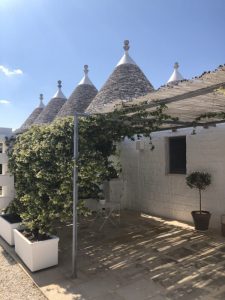 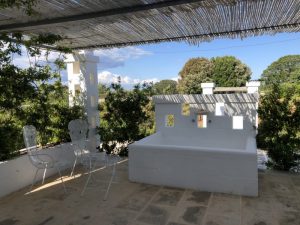 Our individual trulli, with their thick stone walls and simple yet stylish décor, exuded warmth, homeliness and luxury. With only 11 trulli, as part of a farm that included an orchard of mandarin, lemon, plum, pear and cherry trees, a vineyard, herb and vegetable garden, restaurant, kitchen, library and outdoor dining area, it felt like staying at the comfy home of a wealthy and welcoming friend. The staff were exceptional – their passion for sharing the food, wine and delights of Puglia was infectious and they made it their mission to ensure we enjoyed every part of it. As we stayed a total of seven nights, we felt like part of ‘la famiglia’ by the time we left.

Make sure you indulge in the 3 course dinners for a very reasonable 40 euros per person in the cosy restaurant, or lunch in the sunshine on the cobblestone terrace. If you feel like something more relaxed, the staff will be happy to serve you antipasti in your room, washed down with some local wine accumulated on your travels.

Basing ourselves in this northern area of Puglia meant we were with an easy 15 minute to one hour drive to most of the towns, villages and other activities on our ‘to do’ list.

The simple dishes of Puglia – built around durum wheat, vegetables and olive oil, with meat and fish – have long been considered ‘povera’ (poor, or for the peasants), but today food lovers are discovering the authentic deliciousness of this cuisine. Known as Italy’s breadbasket, Puglia is reputed to produce the best flour and bread in Italy. It also grows 70 per cent of the country’s fruit and vegetables.

The pasta – orecchiette – are ‘ear shaped’ morsels served with a variety of sauces, while another favourite is panzerotti – a folded pizza filled with tomato and cheese fried so that it is crispy on the outside and soft and gooey in the centre. Both can be experienced as part of a cooking class and dinner at Nina Trulli – a fun way to create your meal for the evening while learning a new skill to impress your dinner party friends back home.

Every meal in Puglia is accompanied by taralli – twists of crispy biscuits flavoured with fennel, black pepper, poppy seeds and much more. Fava beans with braised wild chicory or other bitter greens in peppery olive oil is another staple. The region is also famous for its burrata cheese with its solid outer skin and creamy filling, and its sweet pasticciotti.

A great way to experience typical Apuglian food is to lunch at Il Cortiletto in Speziale. Plan to not eat before or after your visit as the serving sizes are huge, but a great showcase of the vegetables, fish and meats of the region. 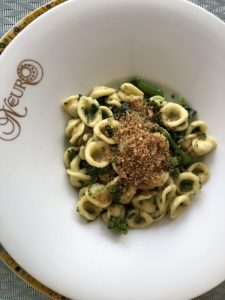 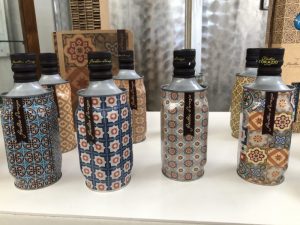 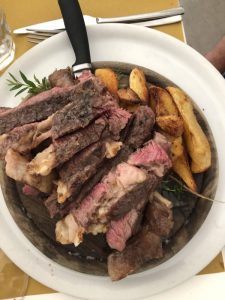 Keen to discover the famous olives of Puglia, we headed to Frantoio D’Orazio in Conversano, for some olive oil tasting. Puglia boasts some of the oldest olive trees in the world, some dating back thousands of years and UNESCO heritage listed, and the family-owned Frantoio D’Orazio showcases some of the best blends, including 100 per cent organic varieties. From smooth to piquant, the oils are packaged in brightly-coloured tin containers, inspired by the colours of the sky and sea and the historical tiles found in the homes and public buildings in the area. Needless to say, we didn’t leave empty-handed!

We also focused on tasting the local wine varieties. Grapes have been grown in the region for hundreds of years, but mostly exported to the north for processing and bottling, hence the wine industry in Puglia is relatively new. However, it is now the second largest wine producing region in Italy and there are an endless number of wineries to explore.

A visit to I Pastini, established in 1996 and located between Locorotondo and Martina Franca,  included a tour of the vineyard, and a tasting in the original masseria, dating back to 1700. The winery is managed by the Carparelli family, who are committed to recovering and promoting the native grape varieties. The crisp and floral Verdeca Spumante Brut was the perfect start, followed by the well-balanced and herbaceous Rampone Minutolo Bianco; a soft and fresh Le Rotaie Susumaniello Rosato; the light and easy drinking Arpago Primitivo Rosso and the complex and spicy Verso Sud Susumaniello Rosso. 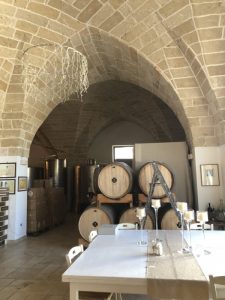 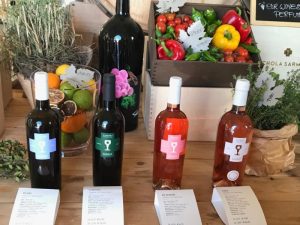 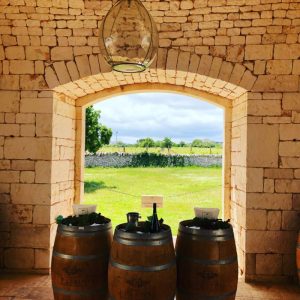 Schola Sarmenti, in Nardo, southeast of Lecce, is worth the visit, if only to experience the underground cellars which once operated as enormous natural stone vaults for the wine that was then sent to regions such as Tuscany for bottling and exporting. Built in the mid-18th century, the winery building, which had been abandoned for 50 years, was reopened in 2000. You can now tour the cellars and taste the wines, including local grape varieties Fiano, Negroamaro, Primitivo and Susumaniello.

Another notable winery which was on our list, but sadly we ran out of time to visit, is Tormaresca, consisting of two estates – Bocca di Luppo, between Foggia and Bari; and Masseria Maime near Lecce.

Puglia is literally littered with quaint towns and villages, complete with cobblestone streets and an abundance of churches and historical buildings. Some sit proudly atop green hillsides, surrounded by rolling countryside, while others boast stunning views of the Adriatic or Ionian coastlines. Just remember, if you are visiting outside the tourist season, the shops close for siesta from approximately 1.30pm to 4.30pm, so time your visit outside of these hours or plan to have a very long lunch at a local restaurant!

Pogliano a Mare is one of the most photographed places in Puglia, with its famous cliffs plummeting to the sea and the iconic La Grotta Palazzese restaurant perched in a cave overlooking the azure ocean. You can get lost in its winding streets, shops, piazze, cafes and restaurants, searching for the perfect gelati! Make sure you sing a rendition of ‘Volare’ at the statue of Domenico Modugno, who hails from the picturesque town and made the eponymous song famous. 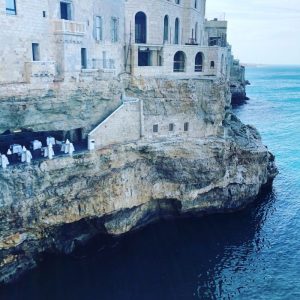 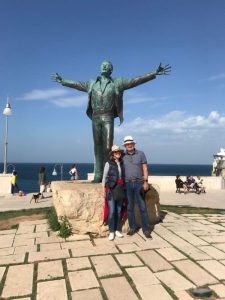 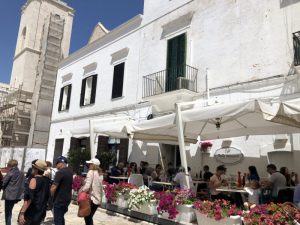 Monopoli is a quaint fishing village on the Adriatic coast, with a buzzing piazza and laneways dotted with bars, restaurants and shops. 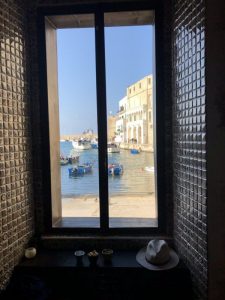 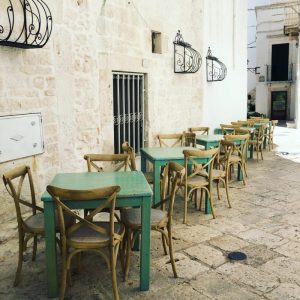 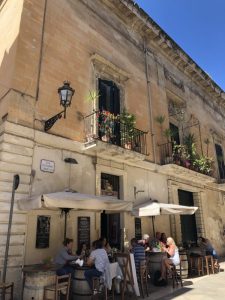 Locorotondo is a majestic town overpowering the surrounding countryside with its hilltop presence. Make sure you call into L’Arco dei Tipici to sample some authentic Apuglian delicacies and taste the wines from Cantina Cardone.

Ostuni is known as the ‘white city’ for its characteristic limestone buildings, while Lecce is called the ‘Florence of the South’ for its magnificent Baroque architecture, boutiques and handicrafts. 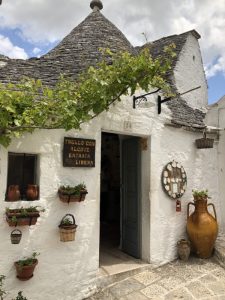 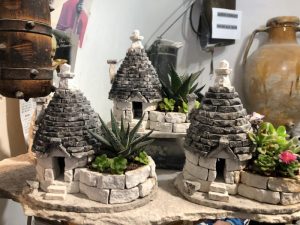 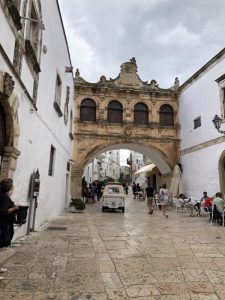 Alberobello is the town of trulli. It is touristy but worth a visit if you aren’t staying in a trullo and want to see them up close.

There are lots of other, smaller villages that are quieter and less touristy, such as the quaint Cisternino.

We hired two cars for our group of six and drove to and from Rome – a five-hour journey, but mostly by motorway, so not too arduous. Alternatively, flying into Bari or Brindisi and hiring a car from there is also a good option. Most towns and villages have carparks near the entry points, so we didn’t find it difficult to get around.

Overall, Puglia was a great experience! Yet another part of Italy I have now discovered and want to revisit. We were there in early June when the weather was mild and pleasant – perhaps a little warmer would have suited me better but I can’t complain. I will be back – hopefully next time to take a dip in that inviting blue ocean!